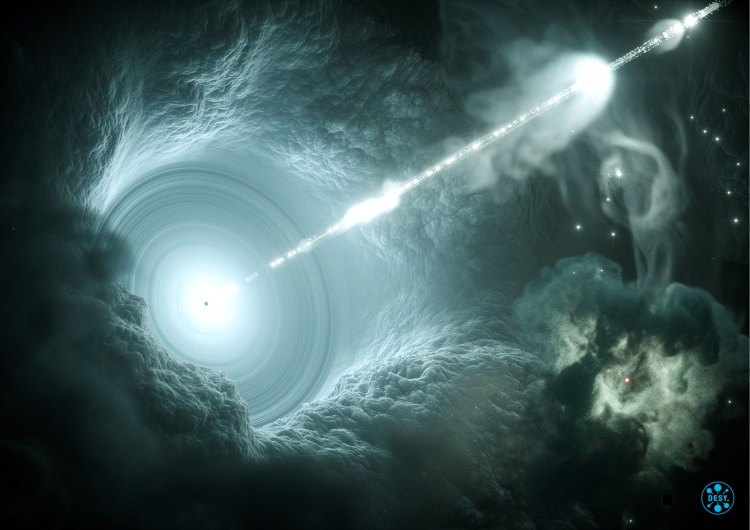 The origin of cosmic rays had remained unprecedented for as long as a century ever since their discovery. Not until the understanding of Blazars came along! Characterized with a relativistic jet stream firing at the speed of light, a Blazar is an Active Galactic Nucleus.

An AGN, short for Active Galactic Nucleus is essentially an active supermassive black hole spitting a relativistic jet of the engulfed matter into deep space. The source was confirmed with the using light and a single neutrino particle coming at our disposal. The blazar is believed to eject high energy protons and occasionally even a whole atomic nuclei towards Earth. The presence of neutrino particles with an energy of around 290 tera eV was confirmed by the IceCube detector located at the South Pole. The energy of the detected neutrino is a staggering 290,000 times that of a proton at rest and 10 times that is used in Large Hadron Collider (LHC) the coordinates of which were recorded and locked by the detector and sent across the world.

The Fermi Large Area Telescope which orbits the Earth is the one which found out a blazar with the exact same coordinates as that of the neutrino. The blazar named TXS 0506 + 056 is 4 billion light years away from Earth.

This discovery in 1912 concluded that there is high amount of radiation present high up in the atmosphere which concurs to the fact that particles slam Earth from outer space. But scientists established a profound coincidence between a supernova and neutrinos in 1987 which led to origin of IceCube detector located in South Pole. Although IceCube came online fully only in 2010, it was successfully able to catch high energy neutrinos lurking in the atmosphere without an obvious source.

Unravelling the IceCube, we find that the detector has 86 strings buried under a mile in ice, with 5000 light detectors laid across 1 kilometer of a side of a cube. These detectors are capable of detecting high energy neutrinos due to the fact that they interact with ice and produce a flash as neutrinos travel faster than what ice allows.

Optimism is surely the way ahead, but we must not be deluded by this breakthrough. The underlying science on cosmic rays is incomplete and it demands more contribution. This opens up new frontiers for research into cosmic rays and the promise of more than what meets the eye.