Ever faced the trouble of converting measurements across different units? I’m sure you would have, at least once.

Turns out not even some of the best engineers find it pleasant, as is evident from what happened 35 million miles away, almost 18 years ago.

On the 23rd of September, 1999, after almost a year of travel through the solar system, NASA’s Mars Climate Orbiter (MCO) went crashing into the planet’s atmosphere in an attempt to establish a stable orbit. The MCO team at the Jet Propulsion Laboratory (JPL) was shocked and so was the whole world.

NASA was quick to appoint an investigating committee to find the reasons for the failure, and the committee’s findings came as a bigger shock.

The root cause for the failure was nothing but a classic case of miscommunication and negligence. The spacecraft was designed and built at the Lockheed Martin Astronautics in Denver, while the communications and flight team was at the Jet Propulsion Laboratory (JPL), Pasadena, California. The common practice at Lockheed Martin was to use English units of measurements and to specify it. The engineers at JPL use metric system so they ought to convert the values given by Lockheed Martin equipment to metric.

The most convenient way to measure acceleration in space missions is to measure impulse i.e. force multiplied with time. The JPL engineers mistook the acceleration readings measured in English units of pound-seconds for a metric measure of force called Newton-seconds. It was thought that the conversion was already made and accounted for at the Lockheed Martin facility.

After 286 days of journey, the spacecraft fired its engines for the final time on 23rd September for orbit insertion. The thruster received the required amount of thrust in pounds, while it applied the thrust in Newton. One pound is approximately equal to 4.5 N. As a result the spacecraft couldn’t acquire the required orbital velocity and was overwhelmed by the planet’s gravity.

Ultimately, the Mars Climate Orbiter came within 60 kilometres of the Martian surface. Simulations showed that, at any altitude lower than 150 kilometres, atmospheric friction would tear the fragile craft apart. 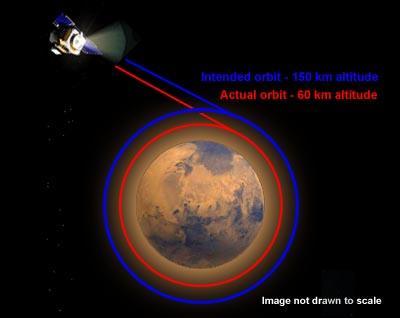 In a sense, the spacecraft was lost in translation.

Everyone was surprised that NASA couldn’t find such a small error, despite months of testing. Needless to say they were short of funds at this time and had to show some results to receive it. The effort to complete the mission faster could be attributed as another reason for the failure.

NASA made huge changes after the incident. The space agency went back to basics, rebuilding its Mars program based on conservative strategies and concepts that had already been tested.

And it worked. The fantastically successful Mars Exploration Rovers, Spirit and Opportunity, rose from the ashes.

The US is the only major nation which still uses the imperial system and not the metric system. The incident was also a reminder of the need to have unified system of measurements, the SI system.

To know more, you can refer the following links.